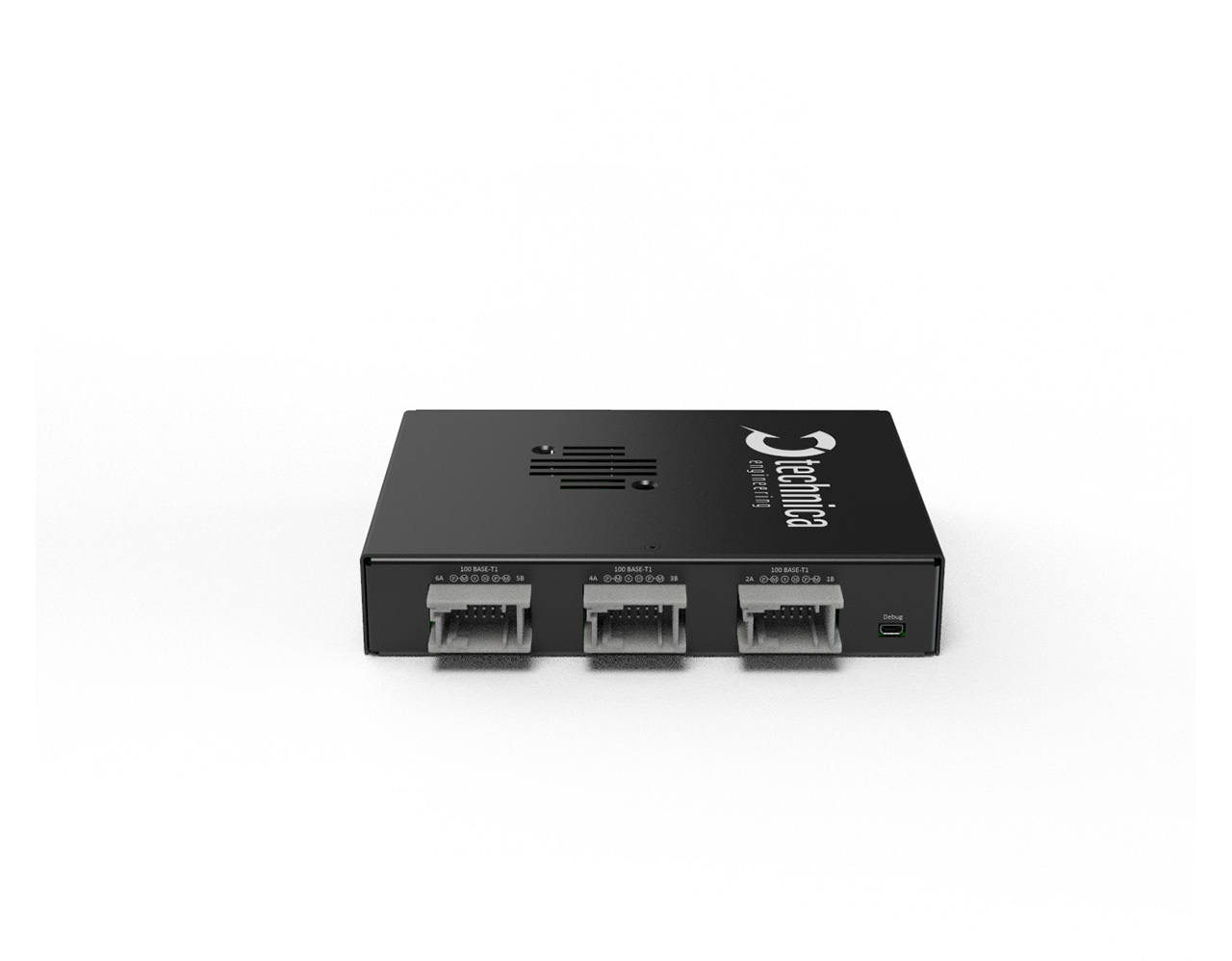 The Capture Module 100 High is an active tap device that is used to capture the 100Base-T1 traffic of up to 6 point-to-point 100BASE-T1 connections (12 ports in total). The traffic is captured without causing interference on the network and delivered with a 40 ns resolution hardware time stamp, making the analysis of AVB/ TSN traffic possible. With a traffic shaping feature included, the logged output of many bus channels is transferred to a data logger or test PC in a steady manor, eliminating bursts that might lead to a loss of data.

Our Capture Modules provide an output of all logged data in standard Ethernet frames via the Technically Enhanced Capture Modules Protocol (TECMP), and thus allow for traceability of the source of traffic, on-the-source timestamp, packet counter, etc., making Ethernet the ideal logging network. In addition, the Capture Module 100 High supports the PLP protocol. The device emits messages timestamped with 40ns resolution, providing a fast and efficient solution including an extended Power Mode for Car integration. Messages are sent within the PDUs of Ethernet MAC II frames via 100BASE-T1 (or Standard Ethernet).

Several devices can be used on the same setup, as further 100BASE-T1 ports have to be captured, or in case you want to log additional bus interfaces. The built-in synchronization using 802.1AS allows the simultaneous use of the Capture Module 100 High with other devices, enabling the cascading with both other Capture Modules and other products like the Enhanced Ethernet Switch.

Via the built-in webserver of the Capture Module 100 High, the device can easily be configured. Additionally, the device includes a rotary switch for the manual configuration of its IP addresses.

Our Capture Module 100 High includes a Startup Buffer and High-Speed Startup feature (<200ms), so the initial Startup information is not lost. Hence, the device is able to record all the important information emitted by the vehicle systems directly from the startup, so that no message is lost in the logged traces.

Technica Engineering´s Capture Modules are a highly innovative and unique traffic capturing solution, with exclusive characteristics adapted to the current technological requirements in the Automotive field.

Our new generation of active tap devices, the Capture Modules family, is developed to fulfil the most critical requirements in contemporary automotive ECU development, which is the reason why our products are used by the mainstream OEMs in the field.

Its innovative features make the Capture Module 100 High a great choice for a variety of testing scenarios.

If you have any question or you are wishing to receive the user manual or more information on CM 100 High, feel free to contact us at technicalsales@technica-engineering.de

The new generation of physical layer conversion between Automotive Ethernet and your PC.

The toolsuite for OEM-specific OPEN Alliance TC8 and Ethernet testing on component level.