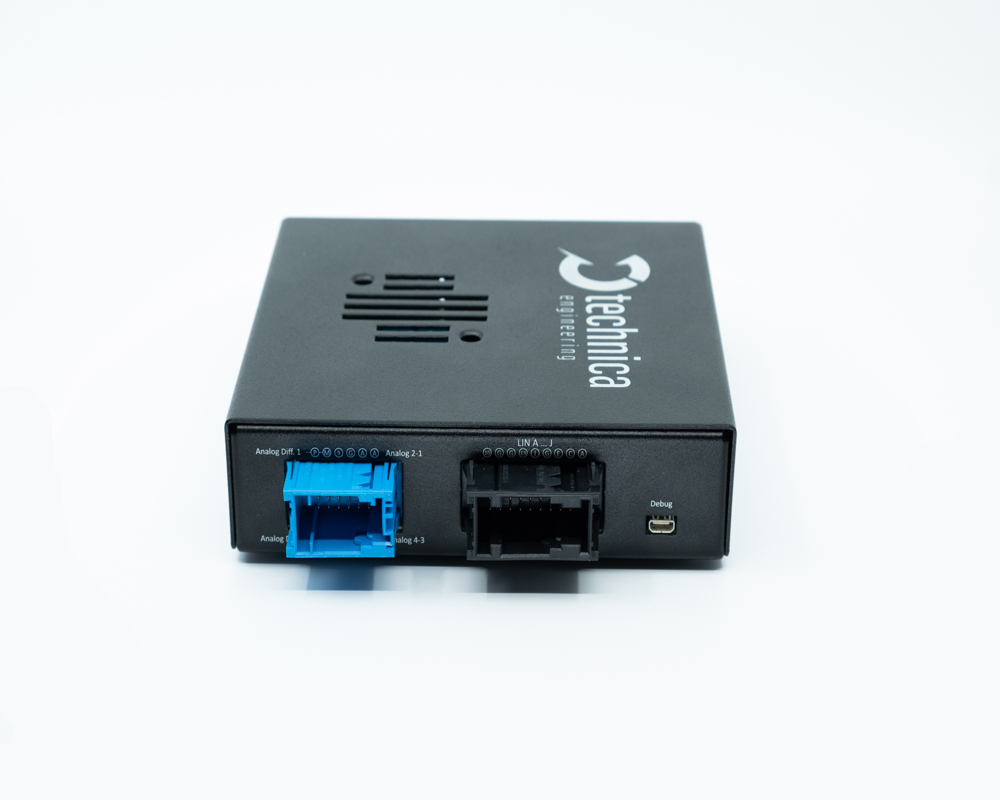 The Capture Module LIN Combo is an active tap device that can be used to capture the traffic from the conventional LIN busses, as well as differential and grounded analogue signals. The data traffic is captured without causing interference on the network and delivered with a 40 ns resolution hardware time stamp for the analysis of AVB/ TSN traffic. With a traffic shaping feature included, the logged output of many bus channels is transferred to a data logger or test PC in a steady manor, eliminating bursts that might lead to a loss of data.

The Capture Module LIN Combo provides all logged data in standard Ethernet frames via the Technically Enhanced Capture Modules Protocol (TECMP). The TECMP is an open protocol that allows for traceability of the source of messages, on-the-source timestamps, packet counters, etc., making Ethernet the ideal logging network. The PLP protocol is supported, in addition. The Capture Module LIN Combo emits messages timestamped with 40ns resolution, providing a fast and efficient solution supported by its extended Power Mode for car integration. Messages are sent within the PDUs of Ethernet MAC II frames via 100BASE-T1 (or Standard Ethernet) and contain the responding time information of when they were captured.

Several devices can be used to capture data on your setup as soon as more interfaces are needed, or in case other IVN technologies have to be captured. The built-in-synchronization using 802.1AS allows a simultaneous use of the Capture Module LIN Combo together with other Capture Modules. This means that the cascading with any other device within the Capture Modules group of Technica Engineering is possible, but also with other products like the Enhanced Ethernet Switch.

Via the built-in webserver of the Capture Module LIN Combo, the device can easily be configured on a browser website. Additionally, it includes a rotary switch for the manual configuration of its IP addresses.

The Capture Module LIN Combo includes a Startup Buffer and High-Speed Startup feature (< 200ms), so the initial Startup information of ECUs is not lost. This way, the device is able to record all the important information emitted by the vehicle systems.

Technica Engineering´s Capture Modules are a highly innovative and unique traffic capturing solution, with exclusive characteristics adapted to the current technological requirements in the automotive field. Our new generation of devices is developed to fulfil the most critical requirements in contemporary automotive ECU development, which is the reason why our products are used by the mainstream of OEMs in the field.

The variety of additional features of this tap device makes the Capture Module LIN Combo a great choice for a large variety of testing activities.

If you have any question or you are wishing to receive the User Manual or more information on CM LIN Combo, feel free to contact us at technicalsales@technica-engineering.de

The development tool for testing and analysing on-board vehicle networks GUIDELINE FOR THE EXECUTION OF RETURN OF PRODUCTS-CASES

Dear business partner,
please take note of the following, which enable us to handle products that you would like to return as promptly and as efficiently as possible.

If you have general support questions about our products, please refer to us via Email to support@technica-engineering.de

1. For the return of products this form is necessary.
2. Please fill the form thoroughly.
3. Please, print the form and enclose it to your consignment.
4. Following this, please send your parcel within 5 business days to:

To ensure promt processing, please make sure to always enclose your form. We might be unable to process and have to return your consignment to you if we received it without the according return of product form.

RMA execution internally (only for packages with RMA form)

1. The processing time after arrival is 14 business days.
2. After the processing time and within the warranty of 6 months, there will be an immediate replacement (new goods) if the goods are in stock.
3. Tracking is sent to the customer by email.